Starting to train in Mixed Martial Arts can feel really daunting. There is so much to learn that it can be hard to know where to start or what is important. A good MMA coach can provide guidance on how you should approach your training and on what skills to prioritise. Unfortunately, MMA is still a relatively young sport and good coaches are rare. As a result many athletes find themselves in a position where they are able to receive excellent coaching within a single discipline but, when it comes to MMA, they are essentially training themselves.
In this scenario it is very easy to end up chasing your tail and do lots of work without achieving anything at all. So here are six core skills and drills that any aspiring fighter needs to include as a regular part of their MMA training.
######
Develop A Consistent Structure.
The skill set of Modern Mixed Martial Arts is primarily made up of three distinct facets – stand up, clinch and ground. Each facet has a primary discipline which is then blended with the primary disciplines of the other facets to construct a complete MMA game. Stand up is typically comprised of Boxing or Kickboxing, clinch is Wrestling or Judo and ground is BJJ, Sambo or Collegiate/Folk style wrestling.
One of the problems with this approach is that each of these disciplines teaches a stance, structure and approach to footwork that is completely different from the next. Their structure is optimised for the specific rule set of their discipline and not the specific rule set of MMA. Most obvious is the difference between grappling and striking based martial arts in lead hand preference. Grappling arts usually advocate power side forward where as striking arts advocate having your power side to the rear.
One of the best things an aspiring MMA athlete can do is develop a consistent structure. Choose a lead side and stick with it; choose a core structure and stick with it; yes, your performance in the individual disciplines could lag a little but your overall performance in MMA will go up.
Learn How To Use The Cage
The cage has been referred to as the 4th discipline and that may be under valuing just how important knowledge of how to use the cage both offensively and defensively may be. Part stand up, part clinch and part ground work the dynamics of the fight change radically whenever it is brought into play.  Athletes who know how to work the cage have a significant advantage over those who don’t.
At a minimum learn and regularly practice the following:
How to properly pin an opponent against the cage.
How to escape those pins.
The takedowns which are most effective and how the cage changes how they are performed.
How to both turn off and walk your shoulders up the cage.
Learn How To Stand Up.
A strategy made famous by Chuck Liddell and further refined by the likes of Cain Valesquez and Georges St Pierre the ability to stand up and bring the fight back to its feet is crucial in modern mixed martial arts. While it is obvious why an athlete who prefers to stand and exchange strikes would need to be able to bring a fight back up from the ground this skill is also vital for grappling orientated fighters who have ended up on the ground on their opponent’s terms and not their own. If you can dictate where and how a fight takes place you have a significant advantage over your opponent.
This skill is much more than being able to execute the technical stand up as taught in most Jiu Jitsu academies. Although that is important, I strongly recommend researching collegiate and folk style wrestling techniques for returning to a standing position if your school does not already teach them.
Learn How To Use Half Guard Properly.
Half guard may well be the most commonly occurring ground position in MMA. The combination of high levels of athleticism, no material to grab, comparatively short rounds and the merging of disciplines creates a situation where both top and bottom positions are difficult to maintain in a grappling situation. As such half guard, which can be thought of as a position between positions, becomes increasingly important.
On top you need to be able deny your opponent the chance to fully re-guard or stand up while working to pass or strike. Ideally this is done without resorting to “lay and pray” tactics as under most modern rule sets this will result in a stand up.
Underneath it is even more vital to understand the dynamics. You should know how to protect your head, deny the pass and come up either behind or on top of your opponent.
Understand The Dynamics Of Ground & Pound.
Effective striking on the ground is much more than simply pounding away at a downed opponent. At its best it is the sophisticated merging of grappling and striking technique on the floor. At its worst it’s an invitation to be quickly submitted.Research and practice gripping strategies that maximise both your ability to hit your opponent and advance positionally. You also need to remember that the ability to strike in a grounded situation is in no way limited to top position and learn where, when and how you can strike from underneath.
If you have a coach or training partner who knows how to effectively hold focus mitts whilst fighting off their back or working in your guard this is incredibly valuable and quite rare. Treasure them and train with them as much as possible. 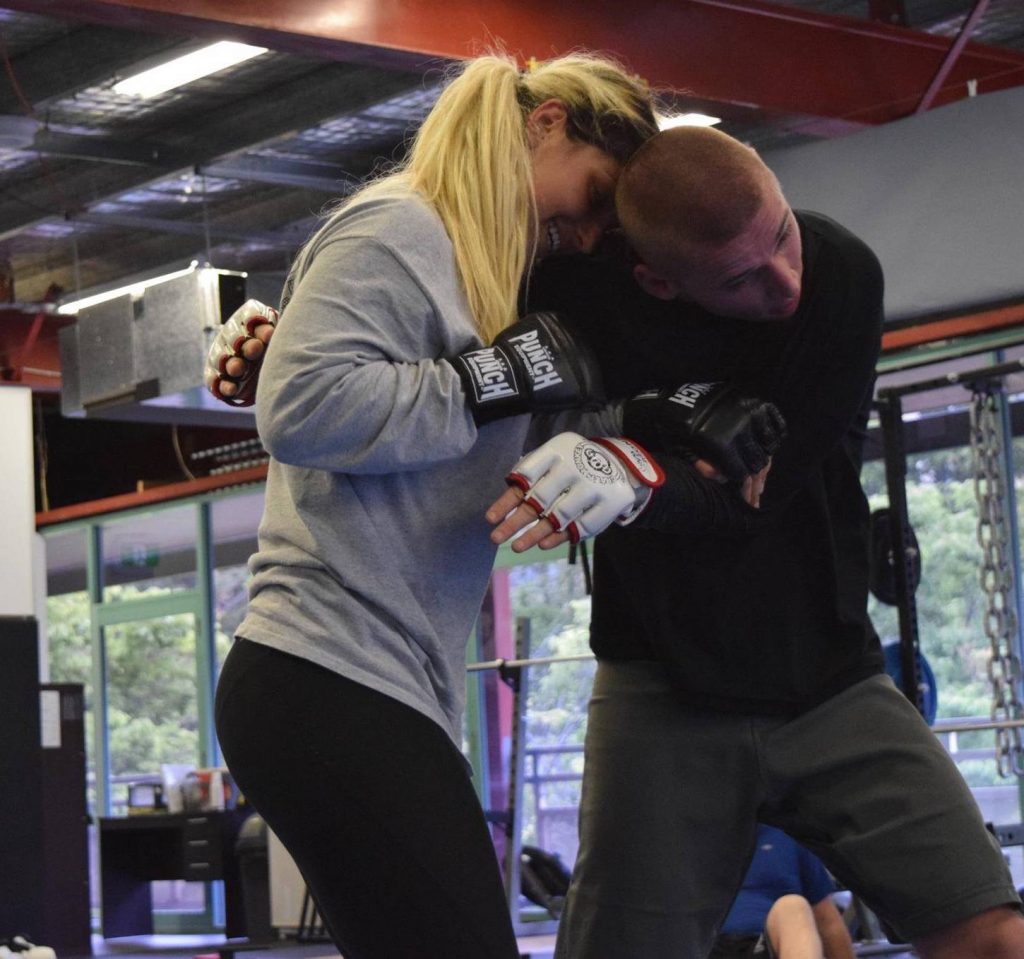 Regularly Combine Disciplines But Limit The Scope.
In the majority of MMA schools sparring tends to take place within the full MMA context of stand up, clinch and ground or else is limited entirely to within a specific discipline (eg. a boxing or freestyle wrestling match).  However, modern Mixed Martial Arts skill is primarily about the interplay between modalities – how grappling and striking change and influence each other.
So, while it is important to fully isolate and integrate the disciplines, limited combinations lead to more focused skill and game plan development. When putting these combinations together make sure they make sense and don’t incentivise bad habits when put back into the full MMA context.
As a starting point we find the following combinations are particularly effective:
Jiu Jitsu with strikes from certain positions.
Boxing with shots but no clinch.
Wrestling with strikes off the collar tie.
######
While there is obviously much more to learn in order to be a successful MMA athlete, the above are keys skills for every fighter regardless of style. Make sure that you address them all regularly and your game will flourish.
How To Shadow Box How To Spar – A Guide For Athletes and Coaches.