How To Be The Best At BJJ All The Time.

Correct the technique of higher ranked, more experienced people than yourself. They love it and will view you with respect and awe. Never wash your rash guard or gi. Just keep it in your car or balled up in your bag. If someone complains they clearly don’t understand the #bjjlifestyle. Don’t pay any attention to […]

Correct the technique of higher ranked, more experienced people than yourself.
They love it and will view you with respect and awe.

Never wash your rash guard or gi.
Just keep it in your car or balled up in your bag. If someone complains they clearly don’t understand the #bjjlifestyle. 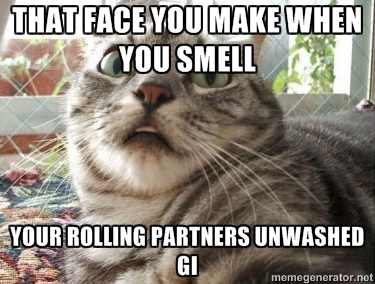 When your partner is practicing a new technique counter it every time to show them they are doing it wrong.
This way they will know that you are definitely better than them and they will appreciate the constructive feedback.

Always roll like you’re in the final of the Mundials.
If you’re not practicing winning, you’re practicing losing.

Attempt nothing.
Just hug your partner and perform a 300 second isometric squeeze. If you don’t attempt to do jiu jitsu you can’t fail at doing jiu jitsu.

About to lose? Start coaching or fake an injury.
You haven’t really been submitted if you stopped trying.

Either don’t trim your nails or trim them right before class to ensure that they are razor sharp.
If your training partner has to leave the mat to make sure they don’t bleed out from the thousands of cuts you just inflicted that stills counts as victory.

Always brag about the submissions you got in training to other class members.
Re-live your favourites with anyone nearby. Your past submissions are like MASH reruns – no one ever gets sick of them.

If you compete in a tournament and lose be sure that everyone understands that the problem wasn’t your poor work ethic, your low level of fitness or your complete lack of technique – it that you (select all that are appropriate):

Just remember that you don’t need to do better; you just need to convince yourself – and everybody else – that you already have.*

Explain how if this was a no gi match you totally would have won.

Explain how if this was a gi match you totally would have won.

Explain how if this was an MMA match you totally would have won.

Exclusively go for techniques you are not allowed to do.
Neck cranks, finger locks and nipple cripples should be your go to moves. BJJ is a martial art for the street and you refuse to water down its effectiveness.

Ask for advice from your coaches and training partners about a problem you are having. Explain to them how it’s not actually a problem and why you are not going to follow that advice.
That way they will know that even your problems are actually successes they don’t understand.

Beat the hell out of new guys.
This will show them the power of BJJ and guarantee they come back.

If you are tired wait until you are losing to stop.
You shouldn’t give your training partner a false sense of success by letting them tap you just because you are tired from all the winning you have been doing. Instead stop rolling and the moment you end up in an inferior position you can’t easily escape from and explain that you are not unfit – you’re just recovering from a max deadlift attempt and the three different Crossfit WODS you considered doing earlier that day.

Don’t tap.
If your training partner let’s go to make sure that you don’t get hurt then the submission wasn’t really on. If you get hurt then they are being way too reckless and there’s no way they could have got you if you had been going as hard as they were.

Always use extra force and power when rolling with anyone smaller and weaker than you.
They will appreciate the respect you show them by not holding back and be encouraged to get better. Whenever you roll someone bigger or better than yourself complain that they are too rough.

Before rolling explain you have an injury and want to go light.
After they agree roll lightly for ten seconds before surprising them by attacking with 100% speed and power. This will definitely impress anyone watching.

*credit to a Josh Hinger rant for inspiring this one.

Self Defence: Is Your Martial Art Up To It? How To Improve Your Cardio Instantly.